Looking for an awards ceremony that actually gives a rip about rock ‘n’roll?

The awards show will feature performances from Avenged Sevenfold, Megadeth’s Dave Mustaine, Anthrax, Judas Priest’s Rob Halford, Halestorm, Body Count, In This Moment, Lita Ford, Nothing More, Starset, Hatebreed’s Jamey Jasta and Power Trip, along with a bunch of surprises throughout the night!

I have decided to part ways with Jeordie White as a member of Marilyn Manson. He will be replaced for the upcoming tour. I wish him well.

Twiggy (Jeordie White) has been in the news for more than his music of late.

He will be replaced on the upcoming tour, with dates now rescheduled. 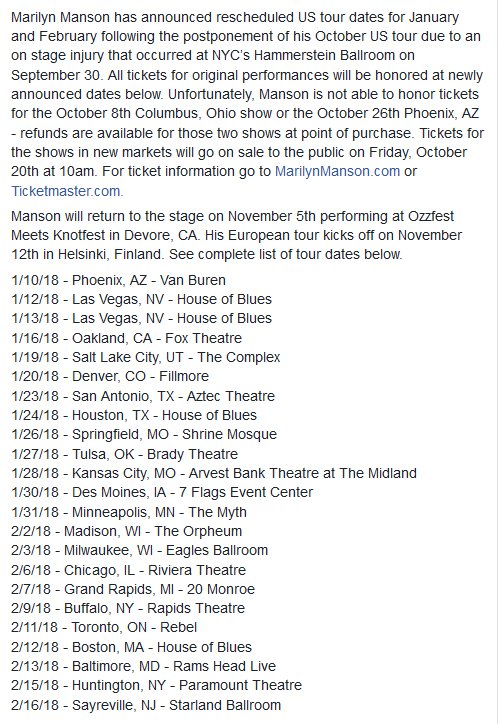 I’m not into contemporary Christian music, but one of the genre’s biggest and most successful tours typically has a small rock flair. The 2018 lineup has been announced and Skillet is the headliner for 2018.

Two shows are scheduled for my location, February 22 in Tupelo and March 3 in Memphis. Here is a complete look at the lineup and schedule from the tour’s official site.

I’ve seen Skillet at this event once before and if you want to get close – there won’t likely be a pit – you’ll have to arrive really early, as the entry is $15 GA at the door and you’ll have to sit through a few acts you’s rather not.

But as far as an encouraging worship experience, it’s great. You’ll just have to deal with the soft music until Skillet shreds and they won’t hold back.

I don’t know much about the band, but I went and listened to “The Monotony” from Parallel Motion and I dig this tune and want more.

First things first, the Memphis date has been postponed, so my first look at The Struts, opening for Foo Fighters, will have to wait until Thursday in Birmingham.

I’ve been trying to find the words to describe The Struts – but it sort of like Queen and The Strokes had four babies and the babies formed a band. That would be this band.

It has been three years since “Everybody Wants” was released and a new record is scheduled (possibly) for early 2018, frontman Luke Spiller recently told Billboard.

The UK foursome has produced some of the most dance-happy rock you haven’t heard. You have a chance Thursday in Birmingham, so take advantage of the opportunity.

They’ve played with the Stones and can boast Motley Crue among their fanbase. You’ll be in that mix too. So if you were planning just to get to BJCC in time for Foo Fighters Thursday, get there earlier and see these guys.

This is the latest single, but subscribe to their Vevo and familiarize yourself and sing along Thursday. “Could Have Been Me” may be my favorite track. It is below too.

You won’t find a better deal the rest of the year than seeing Foo Fighters for $29.50 (plus service charges). Head over to Ticketmaster to get this deal for the show Tuesday at FedExForum.

It’s been more than 10 years since I’ve see Dave Grohl and the boys and I plan to be there with you.

While you’re at it, go pick up the new “Concrete and Gold” plus a bevy of awesome Foo shirts from the band’s store – The Shop of Foo.

From FooFighters.com, the making of “Concrete and Gold.”

Marilyn Manson has been tasked with covering Johnny Cash’s “God’s Gonna Cut You Down” for Ethan Hawk’s upcoming “24 Hours To Live” movie.

It’s actually even a cover for Cash, with ties to Elvis Presley among others. But like this article from NME, Cash has the most recognized version of the reinvented folk song.

Take a listen as Manson teased his version in Moscow. Click here to go to the NME piece.

Trivium;s new record, “The Sin And The Sentence” is scheduled for release Friday. If you’re a SXM Octane listener, you already know “The Heart From Your Hate,” but I’m anxious to see the rock world’s reaction to the whole album.

From Moshville: “There’s elements of every single album they’ve released present in this one and if anything, it might well be their best album to date.”

I hope that’s the reaction in sales. But  I’m a Trivium guy. Like a lot of metal bands with a following, some jumped off ship when Trivium went away from their early stuff a little. Still don’t think Trivium gets the love it deserves from the metal community. Maybe this album will reset that course.

Here are some tour dates, all across the US and Canada.

This year has been brutal, taking away some of our most beloved rockers, Chris Cornell, Chester Bennington and now Tom Petty.

Petty is getting his run of memorial online and the benefit for Bennington is upcoming.

We’ll always have Chester’s music in our playlists, but this “One More Light” video has gotten so fitting following his death, from the close contact with fans to the lyrics I wish we had all paid more attention to before he took his life.

“Can I help you not to hurt anymore? … Who cares if one more light goes out? Well I do.”

Enjoy it one more time, for Chester.