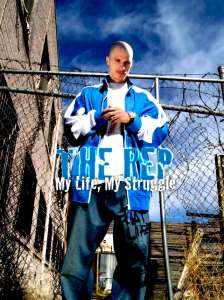 (Note: I did this story last year for a previous blog and am reposting it on this new venture. He has so much good stuff to say, it’s well worth another look.)

One listen to Say No More plenty of time to make arm hair stand on ends.

Whether it’s “Unborn Child,” “Imagine It,” or any of the other 17 tracks on The Rep’s newly released album, the Phoenix, Ariz. Gospel rapper comes hard and comes witnessing.

Brandon Kagel, aka The Rep,one of hip hop’s hidden jewels, for now, took an interest in the genre when his older brother brought home the first rap CDs he came in contact with.

Prior to that, Kagel said he was familiar with Run DMC via the radio.

“I always had an interest for rap music, but that really inspired me,” he said, “the lyricism of it all, when I really started getting into what they were saying, how they were saying it. From there, I really just started establishing my own love for hip hop.”

Even before high school, Kagel said his love for the genre began to develop past just listening to records.

“I just started putting rhymes on paper, really started developing a passion for writing,” Kagel said. “I never really thought it was something I’d ever do for a living, but the older I got, the passion grew more and more.”

His passions grew for more than rap music. It grew for drugs, especially after the tragic deaths of his mother and brother.

The brother of two triplet sisters and an older brother, Kagel’s mother committed suicide when he was 16 years old. His brother would get him to smoke his first joint.

“I just fell in love with weed and started getting high every day,” Kagel said.

At 18, The Rep says he had already been through “a life of addiction and headed downwards,” a life that continued to spiral after the second death of his immediate family.

“At the age of 25, my brother lost his life due to an argument that was spurred on by his meth addiction,” Kagel said. “Obviously I didn’t know all of that was going to happen, so I was following in my brother’s footsteps, getting high and doing every drug I could get my hands on, acid, mushrooms, etc…My life hit rock bottom at the age of 18.”

After losing a warehouse job, Kagel asked his sister if he could get a job where she worked, across town, ironically across from Phoenix First Assembly Church.

He got a job there and moved in across from the church that he didn’t know would eventually be a part of saving his life.

“I was living across the street from that church, a very prestigious, big church with a big property. Behind this church, there’s a huge mountain. I didn’t know anything about the church. I didn’t even know they owned that mountain. All I knew is it looked like a good place to get high.”

Atop that mountain one day, Kagel began to smoke the weed he had grown so fond of and watched the sunset.

“As I was watching the sunset, I just began to cry out to God. I believed in God, but I didn’t believe in Jesus Christ,” he said. “I’d cry out to God and say, ‘God, I’m lonely. I want a wife.’ That was really the desire of my heart.”

About three days later, Kagel met Latoya, who 11 years later would be his wife and mother of two children.

It was in the dating process that The Rep’s life began to unfold before him.

“Her mom happened to be a deacon at this church,” he said. “So her mom buys me a Bible. I didn’t believe in the Bible. I hated Christians. I used to smoke weed out of Bible paper. So I really didn’t have the respect to be appreciative that she bought me a Bible.”

Kagen’s stumble into that Bible was out of what he said was sheer curiosity and boredom.

“As I began to read the Bible, I became convinced that it was the Word of God, that it was true,” Rep says. “Everything was so convincing. Ultimately it was the Holy Spirit that convinced me, but in my mind at the time, it was just like, it all adds up, Christians aren’t just living by faith. There’s logic in what they believe.”

Despite his belief in what the Bible had to say, Kagel still had not accepted Jesus into his life. Past beliefs began to creep in, statements he had heard from his favorite rappers that freely use Biblical and Jesus references in vulgarity-laced songs.

What Kagel was reading was different from what he had always heard on CDs.

“I began to read and of course found out that Jesus said, ‘I am the Way, the Truth and the Life, that nobody comes to the Father except through Me.’ Ultimately the biggest eye opener for me was that if Jesus Christ is the Son of God, then my life has been a lie,” he said.

“All these rappers that I looked up to, Tupac, Killah Priest from Wu Tang, Ras Kass and all these guys who had something to say about Jesus Christ and they had something to say about the Bible, they were professing lies. Even the ones that claimed to know the truth, their lives were not adding up from what I was reading. It’s kind of like when you’ve been hearing something your whole life, then you find out the truth, you’re like wait a minute, either these cats are lying or they’ve been lied to.”

Kagel said from that point on, he made a decision and had to follow it.

“I got born again, God filled me with his Spirit. I went back to that church, got baptized and went back on that mountain one night and told the Lord, ‘God, you gave me this gift to rap. I’m gonna give it back to you. From that moment on, God gave me a tremendous desire to rap for Him, so that’s what I’ve been doing for the last 11 years.”

Kagel is white. He raps. He raps about Jesus Christ and he raps about some things the church sometimes doesn’t want to veer to strongly into.

He said the those three potential strikes haven’t worked against him. Instead, he said God has used those traits to his advantage.

“God just works it out so they really all just work for me,” he said.

Kagel said one young man asked him recently if people were often offended by the stuff he says on record.

“Unborn Child,” a pro-life anthem, for example, speaks through you speakers through the mouth of a child about to be aborted.

The track will rip at the heartstrings of the pro-lifer and should make even the most staunch proponent of abortion see arm hair stand on ends.

Kagel works with Christian-based Crisis Pregnancy Centers of Greater Phoenix and his first real interaction with abortion came in a very real way.

Latoya was working as a counselor to women who had either had or were considering an abortion.

“I was sitting at my computer. My wife was training at the job and the next thing I know, the door flies open and she comes running in the house sobbing,” Kagel said. “I’m thinking she got into a car accident. In order for her to properly deal with women who had had an abortion, she had to witness an abortion to see exactly what goes on and what takes place. She actually watched a child be aborted via videotape.

“She was torn apart. Right then and there, as she was explaining this to me, the question popped into my mind, ‘Brandon, what do you think about abortion?’ When you’re hit with that, immediately you know it’s wrong. Your conscience bears witness.”

His conscience may have told him it was wrong, but Kagel went to the Bible.

“It says in Ephesians, ‘I have ordained you for the foundations of the world,’ that God had a plan for us, plenty of other scriptures, Psalm 139, I can go on and on, but the Bible just talks about how God didn’t consider us created when the sperm and the egg came together, that God considered us created even before we were born. He knew us before we were in our mothers’ womb.

“So to take a life, no matter what stage, it’s murder, because God considers it life.”

Kagel wondered how he could capture that emotion in song, saying God began to give him the words for the song, words spoken through an unborn child’s mouth.

Even with the strong words on “Unborn Child” and throughout Say No More, the rapper said the critics of his bluntness are few and far between.

“That’s’ really not the case,” Kagel said. “I very rarely ever hear critics speak out against some of the stuff I’m talking about. As far as me being white, what I find with black culture is they’re not so much concerned about your color. If you can bring it, they don’t care what you look like. It’s amazing that it works for me. It just kind of gives me that much more of a platform to be noticed and as I’m noticed, I’m able to lift up the name of Christ.”

Christian rock had made an impact in the secular market. And while The Rep says Christian rap may never climb to the heights its secular counterparts does, there’s still a lot of it out there that deserves its chance on MTV.

Kagel is a believer that even some of the secular rappers want to join the Gospel rap game.

“I think a lot of the cats in the secular rap game, they want to do Gospel rap, because in their heart, they know it’s the right thing to do. They just think it can’t be done. So what I hear a lot of times is, ‘Man, I never thought it could be done, but I’m hearing you do it. It makes me want to do it.’”

Kagel says the critics are present, but few and far between in his experience.

Say No More is chock full of honesty, hard rhymes and plainly spoken convictions that blare through the speakers.

But will The Rep, Lecrae, Trip Lee, etc…ever be mentioned in the same paragraph as Eminem and Big Boi?

“That’s a good question. I’m not even sure I’m the one to answer that,” Rep said. “I just think Gospel rap has done better than it’s ever done. It’s got a market now. At the same time, the Devil is the Prince of this world. Will Christian hip hop, will Christian anything ever have what it deserves? As long as we’re in this world, I don’t think that’s ever going to happen, but at the same time, I believe God has called me and a lot of other brothers to greatness, so I think we’ve just got to buckle in and see where he takes us.”

*** Say No More is available on iTunes.